As you exit from Hyehwa station, you are immediately confronted with the loud, screaming face of Americana. McDonalds, TGIFridays, Bennigans and Mr.Pizza, are there to greet you, smiling a vicious, over-priced and underwhelming food quality smile. However, much like Korea itself, appearances are only skin deep. The deeper you peel the layers off of Hyehwa, the more you discover small, hidden gems of Korean cuisine. Sanbong Grill (산봉화로구이) is one of those shining gems, stuck in the muck of franchises.

I don’t like to use the term hidden too often. Although I’ve known about this place for years, but it is not a place that too many foreigners have ever heard about. I didn’t know this at first, but they were actually a popular mul naengmyeon (물냉면) restaurant before they expanded their operations into a BBQ joint. In reflection, their mul naengmyeon (물냉면) is quite exceptional, and as you are about to see, apparently infinite. 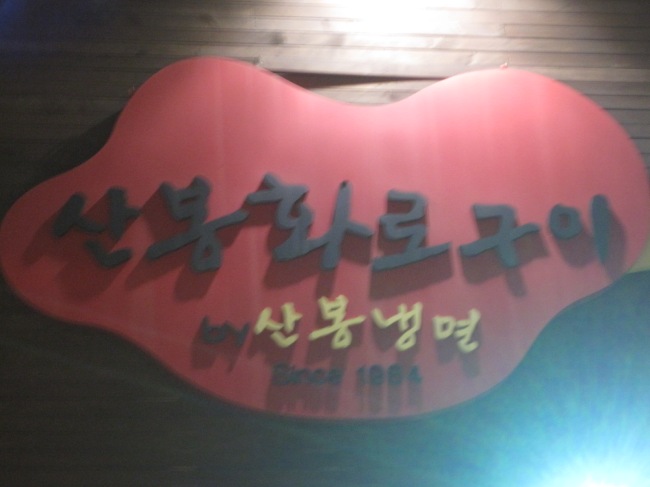 By Subway: Go to Hyehwa station (Line 4) and depart from Exit 1. Make your first right at the ABC shoe store and continue to walk along the path. You are going to veer right and make a turn, just keep following the road. It will be a solid 5 – 10 minute walk. Some landmarks to look for are a 10X10 accessory store. You will see Sanbong Grill (산봉화로구이) on your left. 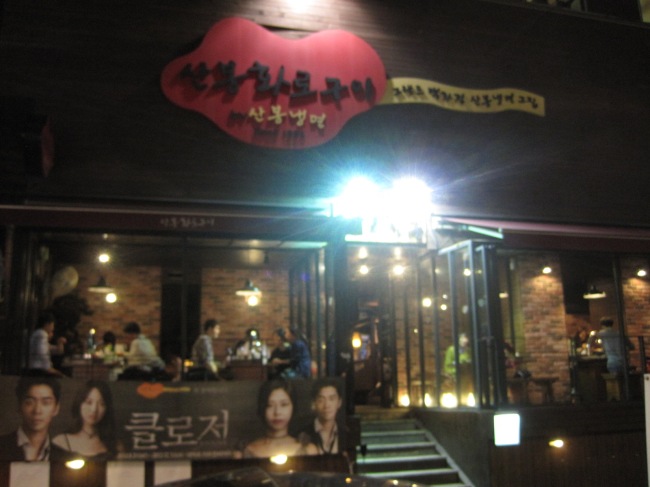 Atmosphere and Service: Sanbong Grill has a rustic atmosphere. It’s as though you’ve decided to have BBQ in an isolated wooden cabin, somewhere deep in the Montana wilderness, slowly cooking your fresh kill over an open fire.. Okay, maybe that was a bit much. But in all seriousness, it does have a homey atmosphere. That said, it is clean and service is quick. Our food was on our table in less than 10 minutes after we ordered. Unlike most BBQ restaurants the grill is not built into the table; they bring it out for you. Have some caution gentle reader, I’ve been nipped by these grills a few times.

The restaurant is two floors, but I would suggest to try to sit at a table near the windows on the first floor. Last night was a beautiful night, and the autumn winds were blowing gently into the restaurant, creating a comforting and relaxing dinner. Unfortunately, we got there too late and so we were placed in the back… by the bathroom. Speaking of which, the bathrooms are terrible. They are okay for number 1, but I would sneak out and go to the theatre nearby if you had to take care of some serious business.

The Beef: I would highly recommend the marinaded, thin beef strips (야염 소고기 삼겹). The beef strips are cut razor thin, and are glazed with a sweet marinade. The sweetness is rich, instead it compliments the natural juices and flavors of the beef. The portions are small, so I would recommend getting at least two or three. We decided to order three for two people. A Korean BBQ novice should take caution, however, these thin strips of beef are difficult to cook. It is imperative that you tend the meat closely because of it’s thin cut, it can easily burn if it’s left unattended. 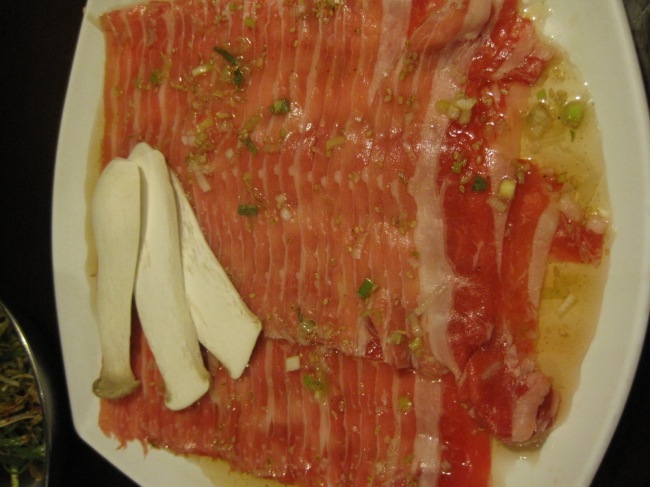 Mul Naengmyeon and the sides: The Mul Naengmyeon (물냉면) is exceptional. It has a generous serving of beef, and veggies. The egg is fresh, and the noodles are plentiful. By plentiful, I mean it seems as though the bowl of noodles never ends. Mul Naengmyeon is a tricky beast. Often when I order it, it comes to the table sour, almost like vinegar. But, Sanbong Grill puts a little less emphasis on the sour taste of naengmyeon, and instead balances it out with a little heat (고추장) gochujang maybe? Cold wheat noodles on a warm autumn evening is one of life’s little culinary kisses. If it’s summer, and you need a refreshing meal, order the mul naengmyeon with your BBQ. The combination of flavors, and the refreshing flavor of the noodles is a culinary treat. 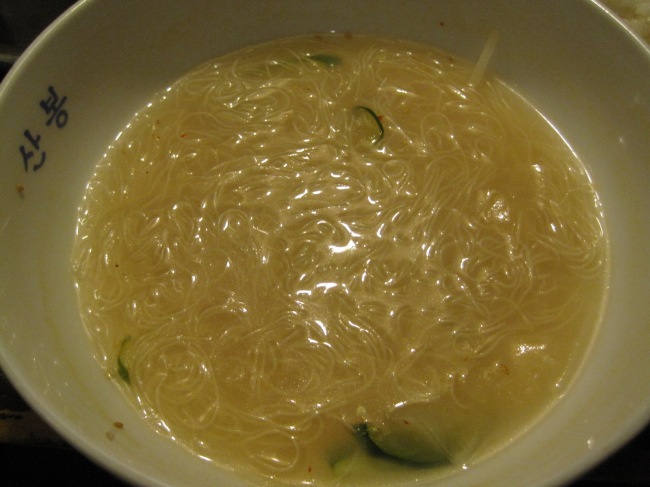 An empty bowl of mul naengmyeon which took a few years to complete.

Another delightful discovery at Sanbong is the kimchi! Unlike most traditional kimchi, which are these chunks of cabbage, doused in red fire, the kimchi served at Sanbong is a sweet heat. It does have a little heat from the pepper sauce, but at the same time, it is balanced out with a sweetness. I’ve never tasted anything quite like it in Korea. If you are with novice kimchi eaters, maybe people who aren’t a fan of the spiciness of Kimchi, this would be an excellent alternative for them. I wouldn’t think twice to recommend this to a person who has a low tolerance for spicy foods. 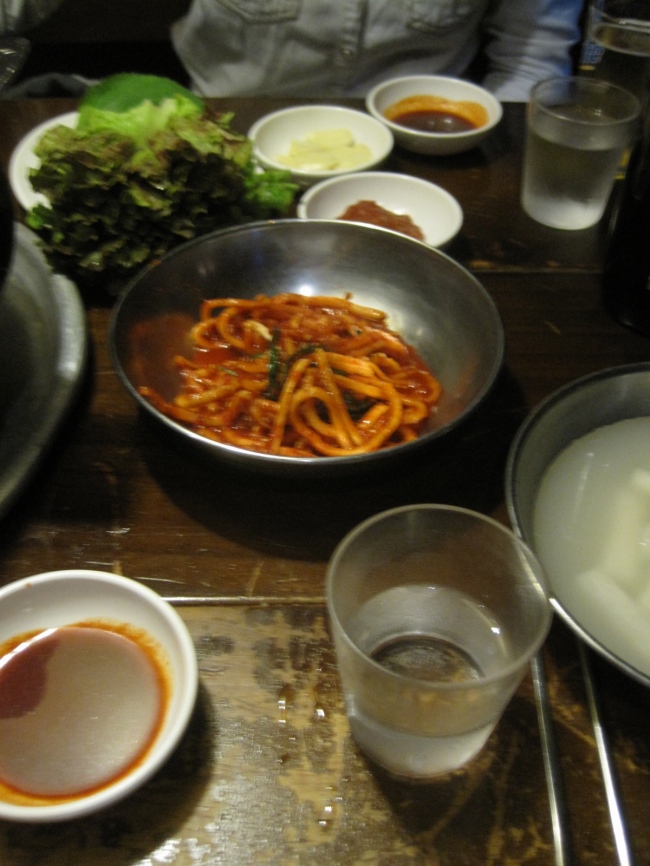 This kimchi is some of the best in the city. It has a sweet heat that is a refreshing change of pace from traditional “face on fire” kimchi.

Herbal Samgyeopsal (허브삼겹살): This fascinating little dish arrives at your table in a small wooden chest. Unlike traditional samgyeopsal, this dish is marinated with herbs and other medicinal properties. However, I don’t think that will offset the heart attack if you eat too much. It does smell different, and is juicer than normal samgyeopsal. I don’t exactly know the herbs that it was marinaded in, so you’ll have to forgive me for that (my Korean is not so good). However, from a taste perspective it is very delightful. It’s tender, and juicy and dipped in a little salt and oil, gives it some flavor. The herbs do little to add to the flavor, so I would recommend ordering a side of salt and oil. Now, my Korean friend said she could taste the herbs, so it might be dependent on your tastebuds. Because of the marinade, the samgyeopsal did cook quicker, and thus, has a greater chance to burn. Take caution and pay attention when you are practicing your Korean BBQ skills. 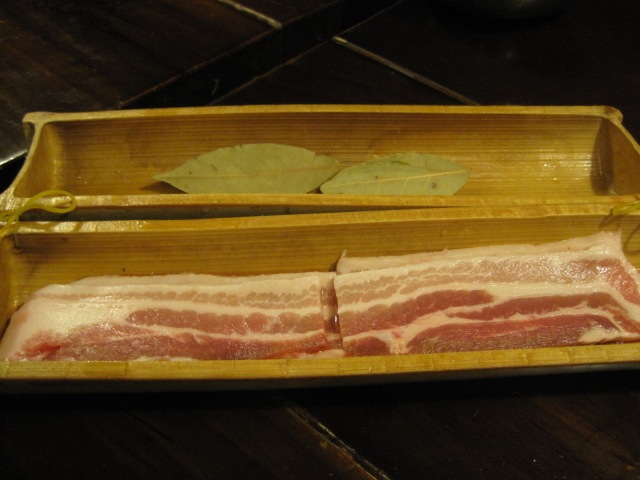 Medicinal Samgyeopsal made for royality. 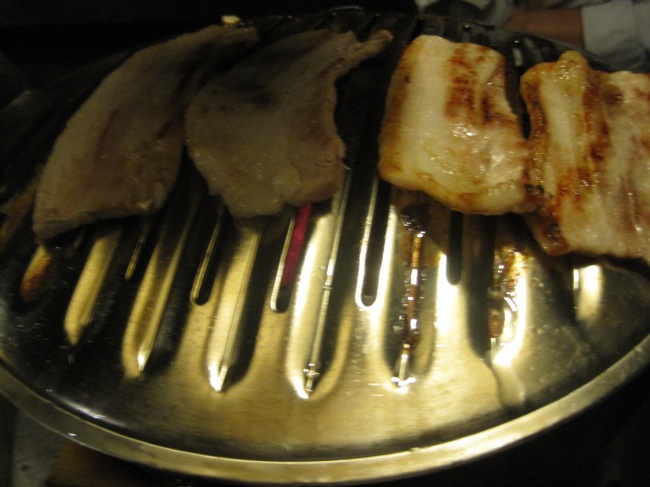 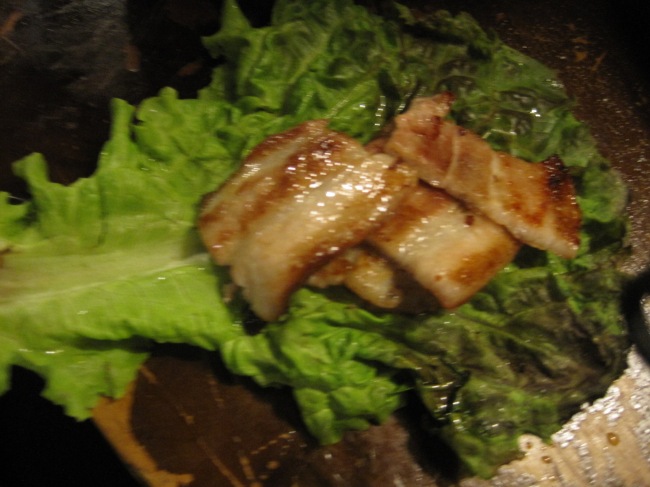 Value: Sanbong Grill is probably a little more expensive than your neighborhood BBQ joint. Three beef strips cost 33000KRW, two orders of Herbal Samgyeopsal cost (17000KRW) and the Mul Naengmyeon (7000KRW). The overall bill with three beers on top of that came to 72000KRW. That said, the food is exceptional and the atmosphere relaxing. The mul naengmyeon is amazing, and the sides are all fresh. You have to make a decision, quality versus price. If you are drunk and want some BBQ, then you should go elsewhere. However, if you are looking for a nice, relaxing and slightly upscale BBQ experience than I would highly recommend Sanbong Grill.

Who should go to Sanbong Grill: Want to impress visiting relatives with your awesome Korean BBQ skills? Check this place out. Want to try some of the best Korean meats available to mankind? This is also your spot.

Who should avoid Sanbong Grill: The menu is mostly in Korean, so if your Hanguel is weak, you might have some difficulty. That said, I can barely speak the language, and I ordered okay. A little on the pricy side, so if you are short on WON this month, you might want to try a cheaper option. Finally, if your BBQ skills are weak, you should probably venture to a place where they can help you. Level that shit up!