The Charlotte Theatre – An Intimate Theatrical Experience in Jamsil

Swearing and fornicating puppets in an intimate environment? Either you have a weird fetish, or you’ve just watched Avenue Q at the Chartlotte Theatre in Jamsil. On Saturday, Jill and I decided to take advantage of Avenue Q’s second last performance in Seoul and have a “dinner and theatre” night (Said in a posh British accent). Unfortunately, dinner was a huge bust. But, the show was awesome, and the theatre was fantastic. Charlotte Theatre is Seoul’s first theatre specifically designed for musicals. The 1,154 seat theatre opened in 2008, with the hopes of promoting Korean inspired musicals.

How to get there: Take the subway to Jamsil Station (Line 2, Line 8) and depart from Exit 3. You are going to circle right. To your right you should see the Lotte Department Store, and attached to that is the Lotte Hotel. The Charlotte Theatre is right next to it. If you are in the Lotte Hotel, go to the 2nd floor and the entrance to the theatre is connected to the hotel. The entrance is beside the buffet restaurant.

Services at the Charlotte Theatre: There are several services at the Charlotte Theatre including a VIP room, which is very fancy shmancy. The VIP room includes alcohol from the luxurious Lotte Hotel, and is going to set you back around 250,000KRW. We looked into it, but since the wife can’t drink right now, and I’m loud enough at musicals without alcohol fueling my passion, we decided to save some money and skip it. The food and drink options are fairly limited in fact. There is a small coffee shop located on the 2nd floor, and a family room. Besides that, and a girl selling ice cream outside of the theatre doors, there really isn’t much to eat, so my suggestion would be to go full.

The family room is located on the first floor and is basically designed to keep the children away from the general audience, so they can enjoy the show. Personally, I think this a great idea. For some reason, some parents think that it is acceptable to bring their fucking five-year-old into a production of The Phantom of the Opera, and expect the kid to be completely entertained. Parents like this clearly have nannies at home, and do not understand the hypnotizing effect that Pororo can have on their child.

Finally, there is  Cloak room, so that Batman can enjoy the play in peace without worrying about his pesky cloak getting in the line of vision of other patrons. If you are arriving by car, parking is underground and available for 4000KRW for 4 hours, and 1000KRW, for every hour after that. My suggestion, save the money and use public transportation. 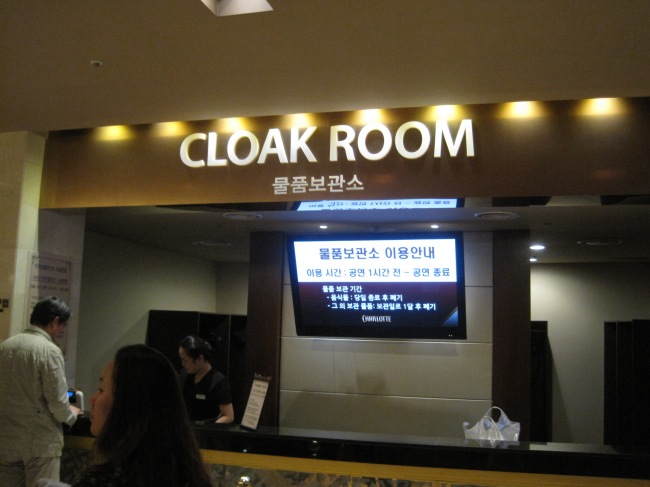 Theatre Design: The 1,200 seat theatre is deceiving when you first walk through the doors. The theatre does not appear to be 1,200 seats, if I had to estimate on first appearance, I would have guessed 800 – 900 seats. What makes this deceiving is that the audience is close to the stage, which creates an intimate atmosphere. Jill and I were in the second balcony, but our view was fantastic. The audience in the lower level probably felt as though they were voyeurs spying on the residents of Avenue Q. The sound that came from the speakers were clear and loud. There was no muffling, no static feedback, and Ann Harada’s character “Christmas Eve”, who is Asian-American, with a heavy accent, came across clear.

Visually, there was no problems. The stage was well-lighted, and the actors, puppets and propers were clearly visible. There are little special effects in Avenue Q, but in my estimation, they would have been clear and visible as well. The lighting was great because it reflected the colors of Avenue Q. A little background on the musical. The musical is a hybrid of puppets and actors; think of a rated R Sesame Street. The colors need to be brightly exposed to capture the themes of the musical, and to set its tone. If the lighting were off, it would take away from the experience of Avenue Q for the viewer.

The chairs were comfortable, designed with the foreigner in mind. There was plenty of legroom and the seats were comfortable. It was clean, and you could move around freely if you had to leave. There is nothing like stuffing your crotch in someone’s face as you head to the washroom. 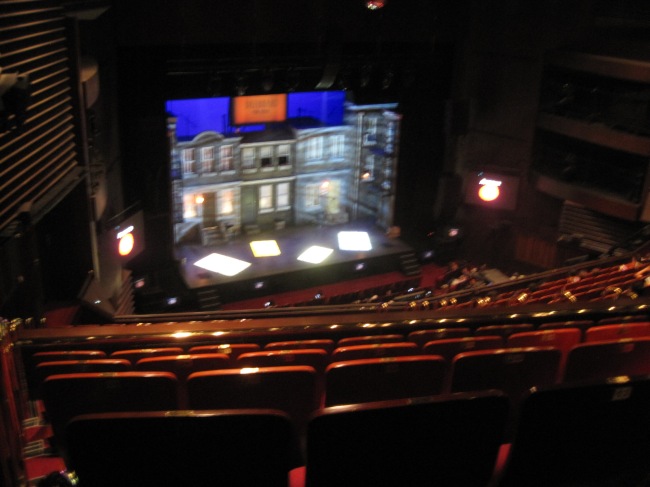 Service: As you could probably tell, these weren’t the best photographs. In my defense, they were taken in hast, as ushers were coming around asking the audience not to take photographs. However, we got to the theatre early, and took a few shots before they started to crackdown. The service is what you should expect in Korea: polite but not overly helpful or friendly. I like to think of a robot, who has been preprogramed to respond to various requests, unable to articulate anything outside their preprogramed vocabulary. Needless to say, there are no complaints, but nothing of outstanding regard either.

Value: Tickets for Avenue Q ranged from 50,000KRW to 130,000KRW. However, there was a deal for two tickets and VIP lounge access for 250,000KRW. Searching their website for past venues, it seems that the prices range anywhere from 30,000KRW – 140,000KRW. This is pretty standard value for musicals in Seoul I’m assuming. Last year, I spent 180,000KRW for Jill and I to see Phantom of the Opera at the Blue Square Music Hall in Hanam-dong. Both experiences were good, and I would pay the same amount to go again.

Who should go to The Charlotte Theatre: If you are a musical buff, like my wife, and want to experience live entertainment instead of looking at the God forsaken television screen, check out the Charlotte Theatre. Make sure though that the play is in English, or it might not be a great experience. Although I would love to see how the Koreans pull of Wicked in Korean.

Who should avoid The Charlotte Theatre: If you are looking to do dinner and a musical in the same building, you are out of luck. You are going to have to stop at two places, however, there are tons of dining options nearby in either Lotte World, The Lotte Hotel or The Lotte Department Store.

← Pino Pasta in the Lotte Department Store – Great Location and Family Friendly, yet Underwhelming Food.
Blacksmith – The Steak and Pasta Franchise that is Popping Up Everywhere →