When in Rome, do what the Romans do. When in Paris, eat where the Parisians eat.

I noticed 연탄 불구이 on my way to Jill’s school one day. The restaurant doesn’t stand out, unless you look close and notice the coal charred briquettes that are alined along the wall. Expatriates who’ve lived in Seoul for years eventually turn into zombies when they are walking around the city. One BBQ joint flows into another, the same old chains blend together like some LSD induced abstract painting. It is as though your life has become an old 8-bit NES video game with the same, monotonous background side-scrolling over and over. But sometimes, if you look carefully, you’ll see something out of place, and this was how I found 연탄 불구이. Unlike most BBQ places,  연탄 불구이 prides themselves on barbecuing with coal, which they bring to you straight from the fire. It’s a comforting feeling, huddled around a small coal fire, especially now as the summer months slow dwindling into the cooler autumn nights.

How to get there: Currently, there is reconstruction at Wolgye station and Exit 1 is closed, so you are limited to two options. First, you can take Exit 2 from Wolgye station, walk along the sidewalk until you see an underpass. Make a left and walk under the underpass until you come to a fork in the road. Keep veering right and walk straight. It will be a one way street and you’ll pass a scrapyard, and eventually you’ll walk passed a Family Mart. You are getting closer. Walk for about 500 meters and you will see Induk University on your right and 연탄 불구이 is right across.

Second, you can depart from Exit 3. Now, this a little further away. You need to make a right and walk down the street until you see the underpass on your right. Make a left. Follow the one way street for about 500 meters, passed the scrapyard, pass the Family Mart and eventually you will see Induk University on your right and the BBQ restaurant on your left, right across from the university.

Service and Atmosphere: Although we have been to 연탄 불구이 countless times throughout the week and on weekends, their hours of operation are a little spotty. For example, one Sunday night we ventured down and it was closed. Yet, the next weekend it was open on Sunday night. My advice is that you venture on a Saturday or a weeknight. On this particular visit, we arrived at 630pm on a Wednesday night and it was packed!

The service is adequate and is nothing special. To be honest, if your Korean is weak and you have trouble ordering in Hanguel, I would avoid this place for now. They won’t help you with your BBQ, they leave that task up to you. So, if you are novice Korean BBQ student, you might want to head to another place that is a little more foreigner friendly. That said, they keep your side dishes full and your drinks flowing, as long as you speak in the native tongue.

연탄 불구이 decor can best be described as cozy and casual. The tables are packed tightly together and the coal briquettes glow inside, making this place a refuge from the cool autumn nights. Instinctively, you will warm your hands over the briquette when the server sets it in. It’s a natural reaction, evolved over thousands of years as man continues to cope with the harsh winter. The tables and chairs are simple and packed together. The patrons at the next table will have no problem including themselves in your conversations. Sometimes this is a good thing, other times, not so much. You decide.

Food: We ordered the 삼겹살 (Samgyeopsal) and the 돼지갈비 (dwegi galbi) with two orders of rice. As it is a school night, there was not alcohol involved.  We got two orders of each since we are eating for three. The 삼겹살 came out first, and it was a beautiful sight to see. There wasn’t much fat on it, which is something that is way too common in BBQ restaurants and it was lightly garnished with salt. Since there wasn’t much fat, it didn’t burn so easily and was a joy to cook. 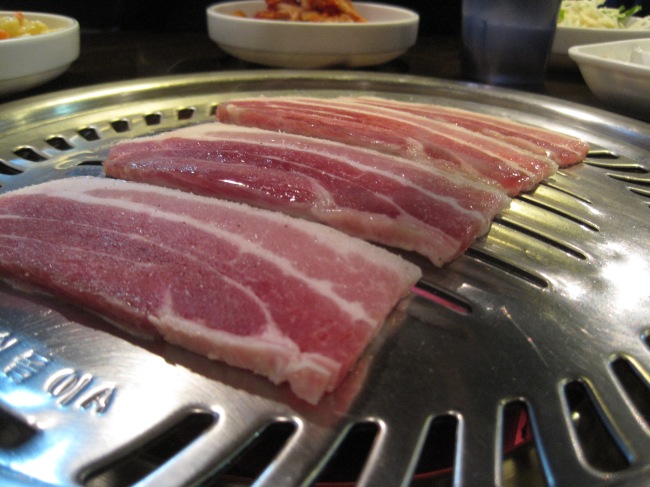 The 돼지갈비 came out next and was marinated nicely. The marinade was nice and sweet which played well with the saltiness of the 삼겹살. However, there was a lot of fat on it, causing a tiny fire that the server had to put out. The fat on the 돼지갈비 was a first in my experience here. In the past, it has been brought to the table attached to the bone. However, in this experience it was presented with all the meat cut off, lumped on to a plate. That is not exactly going to win you any presentation awards. It was strange how both meats seem to contrast in their appearance. 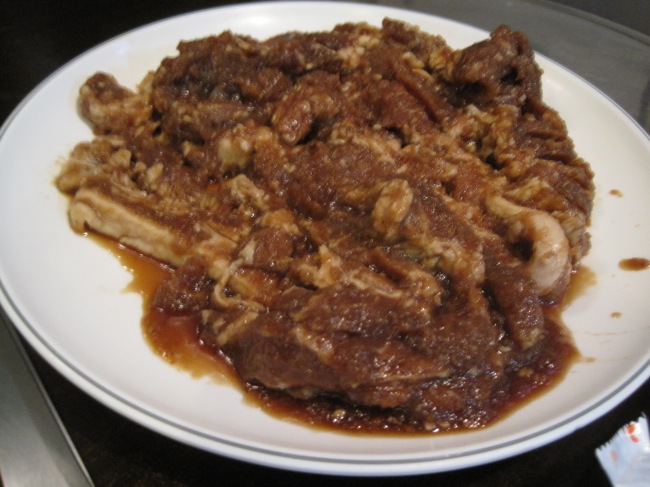 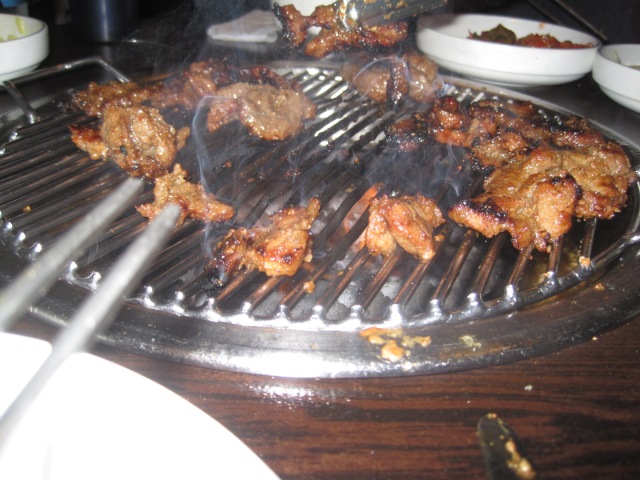 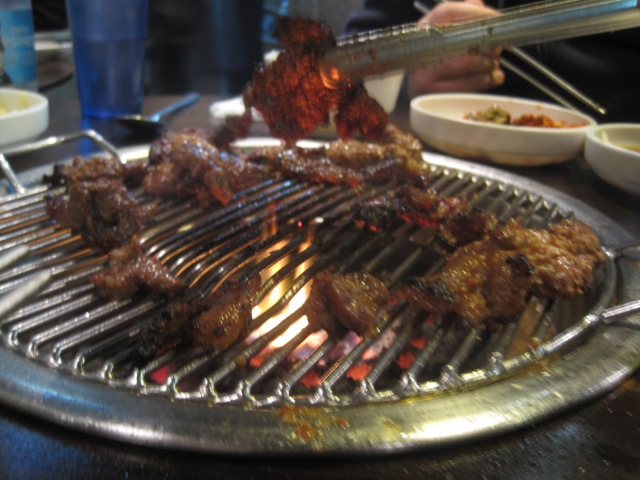 The sides were delicious as well. One side that I never thought I would see, nor have I’ve seen is macaroni mixed in honey mustard and mayo. At first, it looks pretty revolting, but it actually is quite good. The honey mustard’s tartness is balanced by the creaminess of the mayo. It’s an unusual find, I’ll give you that, but it actually complimented the meal quite well. The normal fare of kimchi, kimchi soup and greens filled out our table.

Value: Two orders of 삼겹살 and two orders of 돼지갈비 came to a ridiculously cheap 24,000W. Follow the students, they know good value. I don’t know too many places in Seoul which can give you that much food for under 25000 WON, and good food at that. I would definitely recommend this place for anyone who is on a budget and wants a good, quality BBQ experience.

Who Should Visit 연탄 불구이 (Briquette Bulguyi): Korean BBQ foodies who are looking to save a little money, but still have a quality BBQ experience.

Who Should Avoid 연탄 불구이 (Briquette Bulguyi): The restaurant does not cater to customers who don’t speak Korean. You will need to order in Korea to take advantage of the value. Also, if you have a family, or are intimidated by a younger, more energetic crowd, you might want to avoid this place. 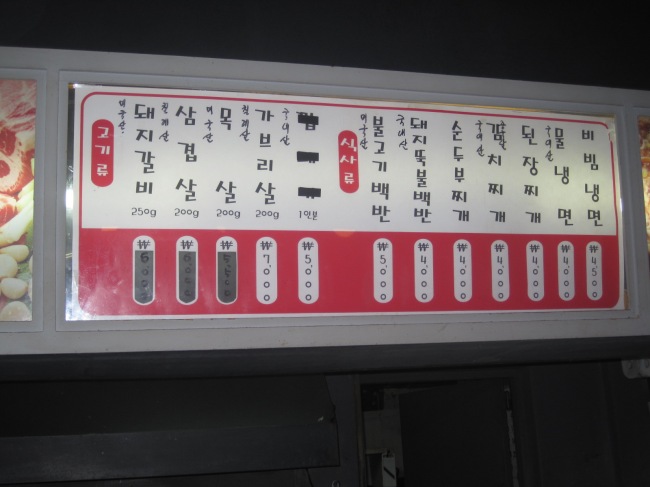