A phone call, a table side conversation and a Facebook confirmation over the span of a week seemed to determine Le Saint Ex’s fate in Itaewon. The long standing French bistro was apparently set to close, and technically this is true. The restaurant will close for the month of February 2014 for renovations. However, this is a little deceiving, because after talking with the staff at Le Saint Ex on Friday, and a previous phone conversation, it appeared that Le Saint Ex was closing its doors forever. At last, the truth was revealed today (Jan 24, 2014) that it will only be a TEMPORARY closure. A note of advice to the management at Le Saint Ex: You really should give more specific information to your staff.

Now, with that out of the way, let’s review one of the best French restaurants in Seoul. Oui? 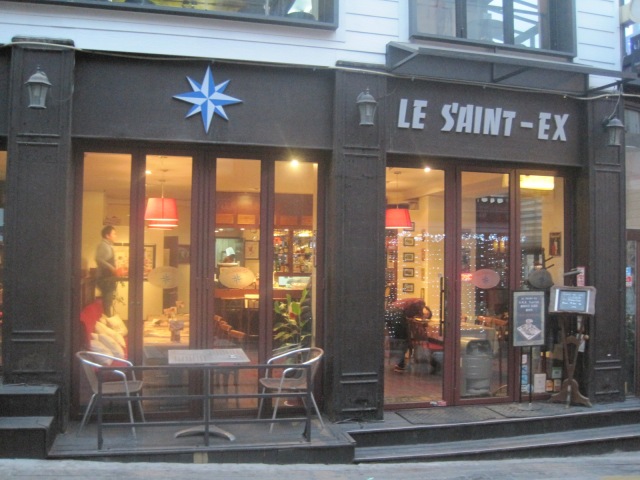 LP’s Description: Not really the best description of Le Saint Ex. LP mentions the blackboard menu and how their wide range of desserts are on display. They also allude to a patio. See those two chairs in the picture? Yep. That’s the patio. You think they would have focused more on the food, and not so much on the giant patio.

How to get there: Take the subway to Itaewon station (Line 6) and depart from Exit 1. You will need to make a right up an alley, just take the one right after the KFC and the Hamilton Hotel. Walk up the little hill and then make a right. You will now be behind the Hamilton and you should see The District and Prost. Make a left and start walking. You will walk for about 150 meters and Le Saint Ex will be on your left.

Service and Atmosphere: Quiet, cozy, and everything a French bistro should be. The walls are decorated with contemporary paintings, a bookshelf with dusty old books and of course stacked with bottles of wine. When the windows of the restaurant are closed, you feel as though you have been transported into a small bistro in the French countryside, instead of the hot, stuff, and snobby Le Chateau of Paris with the crusty French waiter, his nose high in the air, touching the tip of the Eiffel tower.

The service at Le Saint Ex is always great. The servers are not invasive, but they are prompt. Drinks are refilled with out asking and tables are cleared after you’ve finished your dish. They are always polite, and will actually read the menu in French, English and Korean. Although my French is ne pas bien, I felt an air of sophistication as the server read the blackboard menu in French. 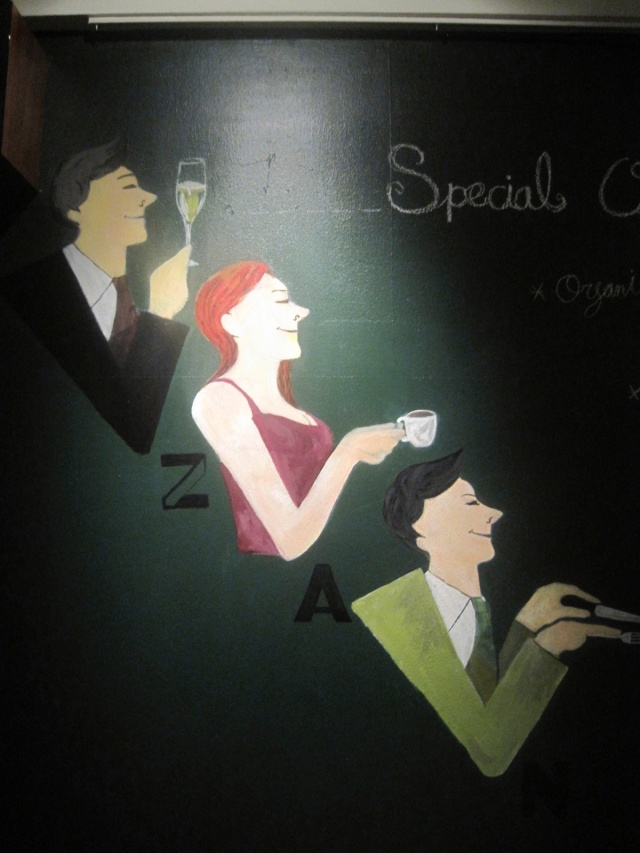 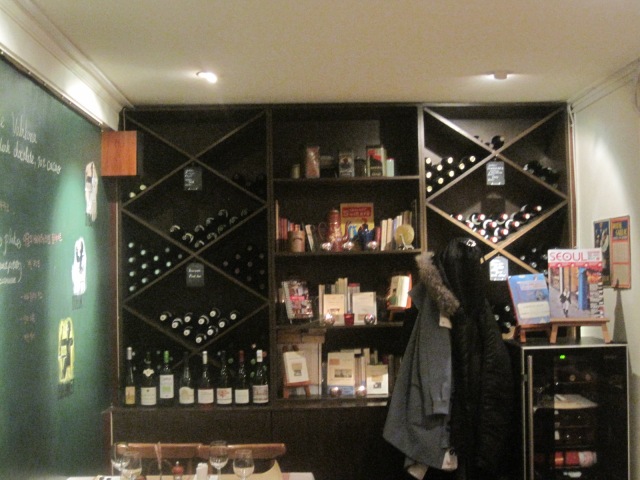 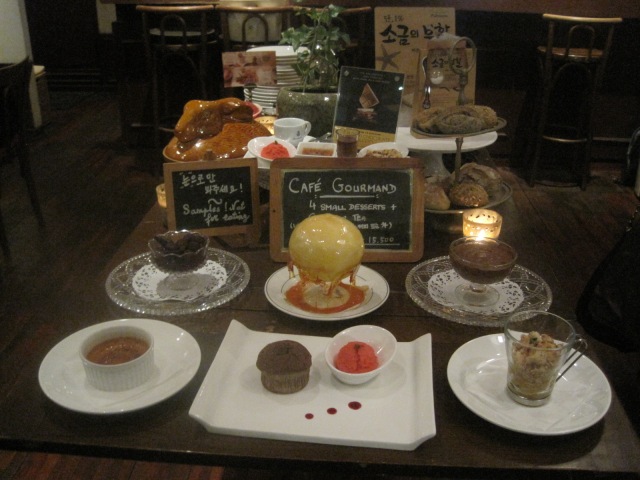 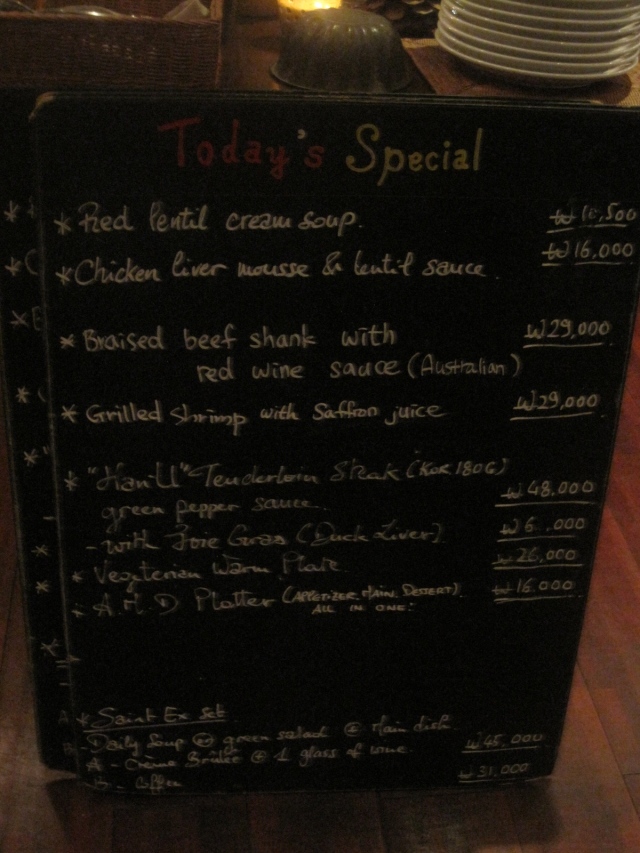 Food and Drink: We started off the night with two appetizers: the French onion soup and the winter soup. For our mains, I ordered the Braised Beef Shank with red wine sauce, and Jill ordered the Steak Tenderloin with green pepper sauce, and Foie Gras. We both order Creme Brûlée for dessert. Apologies in advance for the prices. I don’t know exactly how much our appetizers, wine and dessert was, so I’m going to approximate it.

Winter Soup (12000KRW): The winter soup is a creamy, flavorful blend of sweet potato, pumpkin and a hint of chestnut. The chestnut beautifully compliments the soup with a hint of earthy flavor. The soup was perfect on this blistery January night. Try dipping the soft French bread into the soup, for a flavorful and filling appetizer. 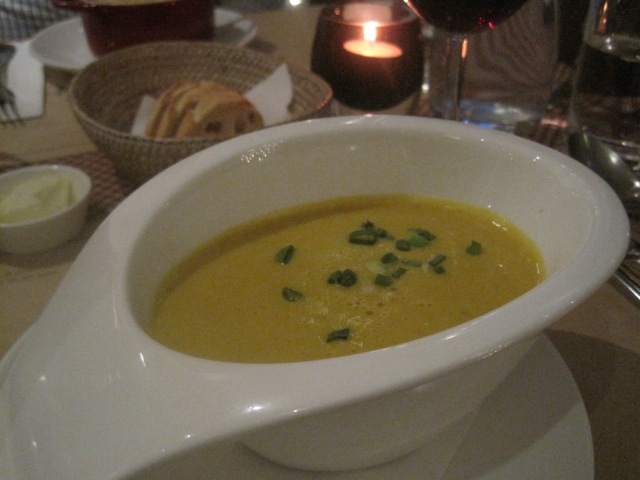 Braised Beef Shank with Red Wine Sauce (29000KRW): Still cheaper than a Crow’s Nest pizza and infinitely better tasting, the braised beef shank was a delightful main for under 30000KRW. The beef was so tender, that it was easily cut with the side of my fork. The red wine sauce was a little tart, but it balanced the salty of the beef dressing. A small bowl of steamed, thinly sliced carrots with butter and onions was a nice compliment to the beef. A small cherry tomato and clove of garlic made this a colorful dishes, as well as appetizing.

Steak Tenderloin with Pepper Sauce and Foie Gras (54000KRW): As much as I enjoyed my beef shank with red wine sauce, if I could go back I would have ordered the Steak Tenderloin. Foie Gras, if the gods made anything better they kept it for themselves. Although, there is a controversy about Foie Gras in the States (several cities have banned the dish), you can’t argue with the taste. The foie gras literally melts in your mouth. The sweetness of the liver combined with the tender juices of the tenderloin were absolutely delightful. The dish also included a potato pie, with cheese and it was all glazed with a tasty beef gravy. Although the meal was over $50USD, this will probably be one of the better steaks you will find in Seoul. A price, in my opinion, well worth paying.

Creme Brûlée (9000KRW): The Creme Brûlée, the denouement of the Le Saint Ex experience. Although it was delicious, it was lacking in cinnamon in my opinion. Creme Brûlée in the past, has always had a little cinnamon in the egg of the brûlée. However, this seemed to be lacking, which in consequence lacked flavor. However, it was perfectly crisped on the top and this added to the flavor of the brûlée. The tiny taps from your spoon, as soft as cracking an egg, make for a gentle and comforting experience. The perfect way to finish the meal.

Drink: Bourgogne Pinot Noir 2010 (38000KRW): We ordered a bottle of Bourgogne Pinot Noir, which is a red wine. The wine was dry, but the flavor complimented the juices of the steak and had a nice aftertaste. A nice investment. If you are going to order the steak, or any of the meats, I would definitely suggest a nice dry Pinot Noir or a Cabernet Sauvignon. 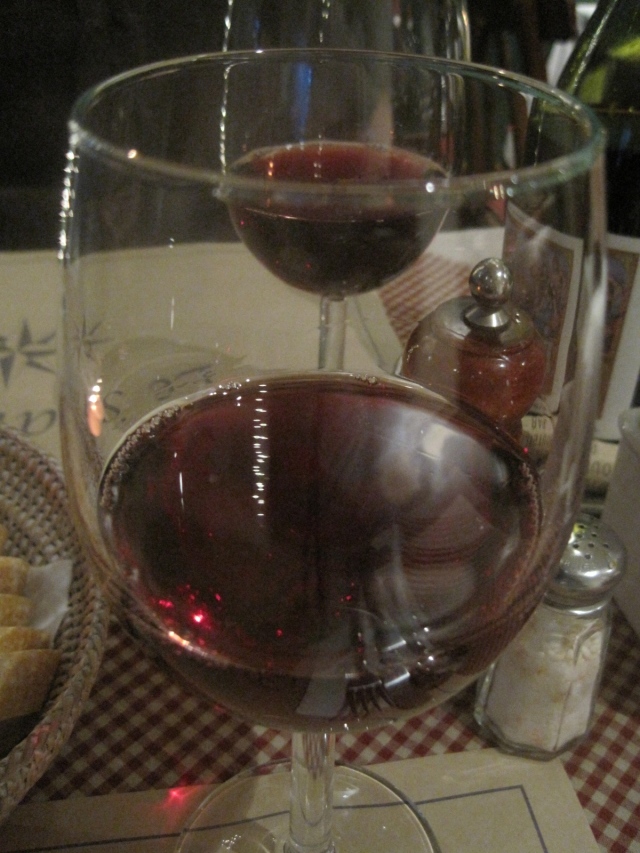 Value: Bring the credit card to Le Saint Ex. Our meal came to 180,000KRW (100,000 was comped by a gift certificate (Thanks Sophie and Jeff!)), but that was with a bottle of wine and all three courses. Now, you can enjoy a solid meal under 100,000KRW if you choose not to order booze or dessert. However, for the full experience, I would highly suggest to save your WON and visit for a romantic Saturday night. That said, money aside, this is probably some of the best French food in Korea, and I would highly recommend visiting here. It’s a shame it will be closed for a month, and what type of restaurant it will be when it reopens is still to be determined.

Who Should go to Le Saint Ex: This is an excellent place for some fine dining, but in a relaxing, casual environment. The steak and foie gras was an incredible combination of flavor. Le Saint Ex is probably for couples or adults.

Who Should Avoid Le Saint Ex: If you are budget traveller, you might blow your entire stack of cash in one sitting. You need to either budget extremely carefully, or just avoid the place altogether. Le Saint Ex is not a place I would recommend for families.  I did see a child there with his parents, but he seemed to a little uninterested in his food and bored in the restaurant environment.