As autumn sets in and the days and nights become cooler, time begins to ticks down in our minds. Winter hibernation will soon be upon us, so we should go out and enjoy the sensible weather while we can. We have been to the Sunday Filipino Market before and always have a good time. The crowd is lively and everyone speaks English. I know it’s a small thing, but I miss hearing my native tongue when I’m out shopping. It’s tough to haggle in Korean. 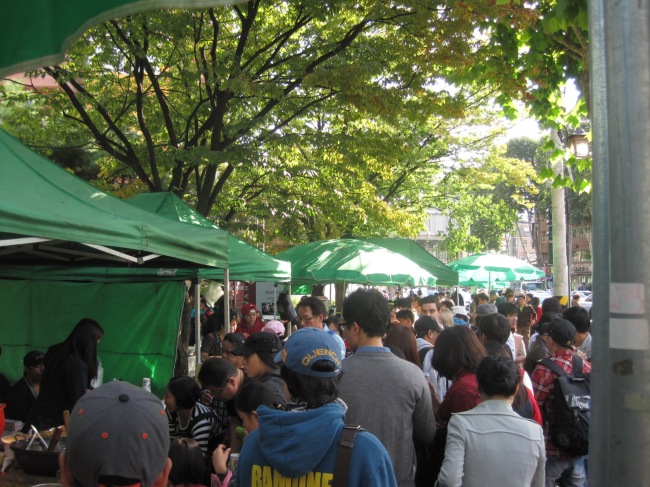 LP’s Description: Seoul’s Filipino community gathers every Sunday to chit chat and and eat Filipino foods including cassava cakes, fried bananas and tropical drinks. You can also buy necessities such as canned goods and telephone cards.

How to get there: Take the subway to Hyehwa (Line 4) and depart from Exit 1. Walk straight for about 30-40 meters towards the green tents. You can’t miss it.

By bus: Catch the 100 or 172 which goes through the center of the city. When you get off the bus at “Hyehwa Rotary” and cross to the left side of the street. You will fountains and the green tents. You will also see a flood of Filipinos coming out of the church. Follow that flood.

Things to do: There really isn’t much to do at the Filipino market except to shop and eat. The market itself is not big, but it has an excellent atmosphere and there is always the possibility of finding a hidden treasure among the stalls of canned goods and coolers of cheap meats. For a foreigner, it’s fun to simply shoot the shit with people and make small talk. It’s one of the things I miss about North America. I miss that daily conversation, that brief moment of time you share with one of our fellow human beings in which we share this Earth. I’ve been to the Philippines and the people are some of the friendliest and outgoing humans on Earth. 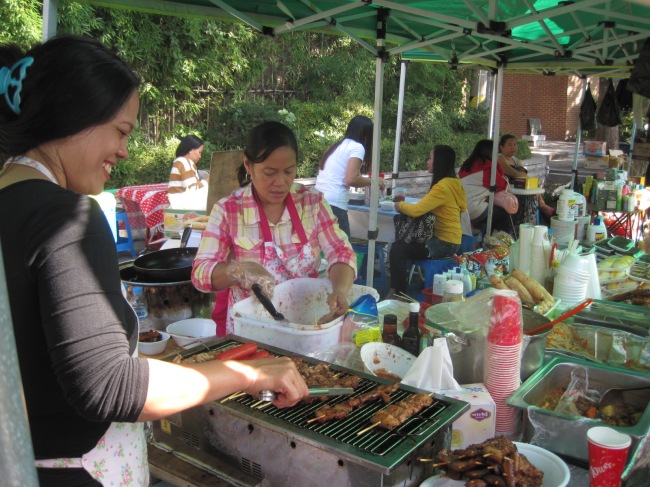 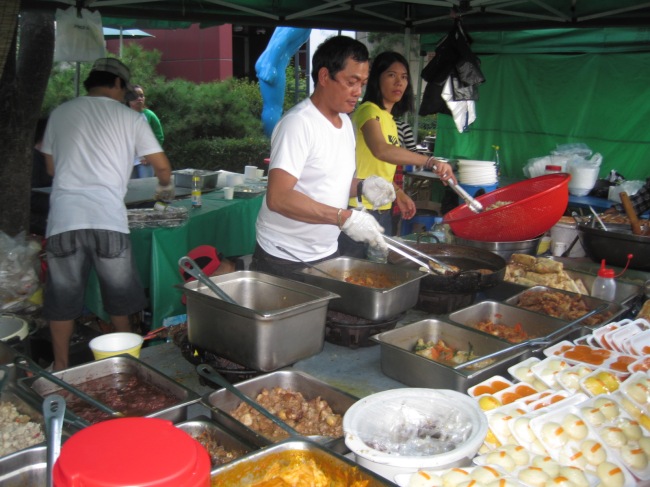 Food and Drink: Beer and a purple dessert called Ube, which tastes like a purple sweet potato makes for an excellent combination. Also, there are skewers of meat, pork mainly but there is some chicken here and there. The aromas lift to the heavens and dance with the Gods. It’s fun to sit down and enjoy it. You don’t need much money either. The pork on a stick was only 2000WON and the beer was 4000WON. There have a picnic table set up for you to sit at, or you can wander around the market looking for deals.

Shopping: Cheap meat is the name of the game here. The Filipino market has meat that isn’t normally available at the big box stores such as Home Plus and E-Mart. Plus, unlike those two giants, they are actually open on Sundays. We picked up 10 pack of pork chops for 10000KRW, and three packs of sausage for 10000KRW. Also, there are canned goods such as condensed milk, tuna, and tons of other various goods that might be difficult to find. Need a calling card or phone case to call momma and tell her about the deals? They have those as well. Can’t find pants to fit your fat Western ass? Guess what? Got those too!

Value: There is always something to find for good value. We picked up the cheap meat and some oats for under 20000KRW. It’s going to beat the box store, or the overpriced foreign food places in Itaewon. In general, even if you don’t pick up anything, it’s still good to have some meat on a stick and enjoy a little Filipino culture in the city on a warm Sunday afternoon.

Who should go to the Sunday Filipino Market: This is actually a pretty nice area for an afternoon date. When you tire of the market, you can head to the various spots in Hyehwa or Hansung for a drink and some lunch. People who want to try some Filipino food, and buy some goods that might be difficult to find in Korean stores.

Who should avoid the Sunday Filipino Market: People who are claustrophobic. This place is packed! It’s a bustling market, so if you are looking for a quiet afternoon stroll than I would avoid this place. Might not be the best place for families because of the crowds, but that said, I saw kids there and looked like they were having a good time eating the goodies.

← Wood and Brick (Le Gourmet?) – European Brunch with the Service to Match
The Flying Pan Blue – The Chefs Who Need to Head Back to Culinary School. →